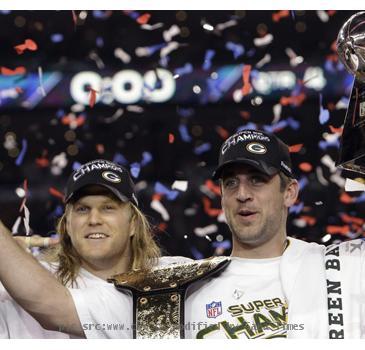 ARLINGTON (GaeaTimes.com)- The 45th edition of the Super Bowl championship was held with much elan last night at the Cowboys Stadium in Arlington, Texas where thousands of football fanatics had gathered to witness their favorite team cruise away to victory. Like previous years, even this time the anticipation of the fans had been soaring as they were waiting with baited breaths to catch the showdown between the AFC champion Pittsburgh Steelers and the NFC champions Green Bay Packers. Despite both the teams putting their best foot forward to win the clash, ultimately it seemed that stars were shining bright for the Packers who were finally able to emerge victorious.

The Pittsburgh Steelers were defeated by their opponent with the score 31-25 to win the much-awaited Super Bowl XLV. Packers quarterback Aaron Rodgers who was later announced as the Most Valuable Player of the game, played a significant role in ensuring his team’s win as he threw three touchdowns with no interceptions and was able to complete 24 of 39 passes for 304 yards. The Packers were able to transform three turnovers by the Steelers into touchdowns and finally sealed victory when Ben Roethlisberger was not able to complete his fourth-down throw with just few moments left in the game.

Although ultimately it was the Green Bay Packers who were able to go home with the Super Bowl XLV title, Pittsburgh Steelers also gave their best shot despite being down by 18 in the second quarter and 11 in the fourth quarter. The AFC champions fought hard to reduce the margin to 28-25 with 7:34 left in the game, but ultimately things swayed in favor of the Packers.