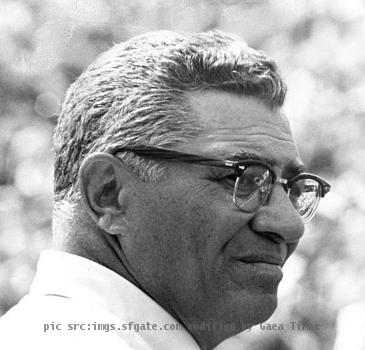 LOS ANGELES (GaeaTimes.com)- Vince Lombardi, the coach of Green Bay Packers is still remembered as one of the most renowned and successful coaches of all time. His success as a coach can inspire the aspiring ones, while put his contemporaries to envy. HBO, in collaboration with NFL films, paid an ode to the celebrated coach, in their 90 minutes documentary, “Lombardi,” that was aired yesterday at 8 p.m. ET, on HBO.

The documentary filmmakers of HBO had to struggle for several years to finish the documentary, with several substantial and intense inputs from the people who were close to him. Vince Lombardi, in the documentary, talked about his upbringing, his faith and his philosophy. Although the original interview lasted for four hours, while the production process was going on, a lot had to be edited in order to squeeze it into a ninety minutes documentary. Vince Lombardi also talked about a few career decision he had taken before, which was met with criticism. One of them was his decision to quit working with Giants and join the Green Bay Packers. He explained that it was a point of saturation at that time and he could not do anything with the Giants anymore. He just had to move on. He wanted to take a leap in his career as a head coach of a professional football team.

Joe Lavine, the co-producer for HBO Sports said that it was like a dream from heaven, when Keith Cossrow, the NFL Films producer, handed him the huge transcript. He was, however, wondering whether “Lombardi” could narrate the whole life of Vince Lombardi in just 90 minutes. However, it turned out to be really good at the end. A new Broadway play “Lombardi,” starring Robert DeNiro is being created by Myriad Parties with the help of ESPN and N.F.L.

LOS ANGELES (GaeaTimes.com)- Rebecca Budig, the actress who rose to fame in the popular ABC ...

LONDON - Gwyneth Paltrow has credited superstar pals Beyonce and Faith Hill with helping her to ...

NASHVILLE (GaeaTimes.com)- Just a week ahead of her debut at Country Music Association awards, A...

LONDON - Britain's Prime Minister David Cameron wore a poppy emblem on his lapel at his reception in...

LONDON - 'The Elf' actor Will Ferrell has been named Hollywood's most overpaid star for the second y...
Copyright© 2010 The Gaea Times