Will Muschamp To Coach Florida Gators 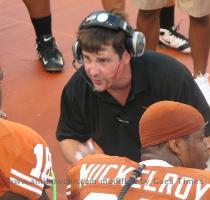 GAINESVILLE (GaeaTimes.com)- Will Muschamp, after serving the Texas Longhorns as a defensive coordinator for three years, will now be elated to hold the post of a head coach. However, with the new post, he would be serving the Florida Gators after replacing Urban Meyer. Will Muschamp said this new opportunity is like dream come true and he would serve the new team will full dedication.

On Saturday night, the Florida Gators announced the news to the media. It was announced that they have appointed Will Muschamp, as the new head coach, who would be succeeding Urban Meyer. However, before this news was confirmed, rumors stirred up which stated that Oklahoma coach Bob Stoops has been finalized as the new head coach for Florida. Jeremy Foley, Florida athletics director denied the news and said that, the team has offered the new job to Will Muschamp, as no one else fitted the bill or met the requirements of the team. Thankfully it took no time for Will Muschamp to agree to the proposal. He has been the head coach-in-waiting at Texas since November 2008. He has been coaching in the college football for the last 16 years. He had eight years of experience as a coach and four years as a player in the Southeastern Conference. He has served as a coach to leading football teams like Auburn University, Louisiana State University.

After Will Muschamp came to know that he has finally been selected as the head coach for the Florida Gators he said that, it was like a dream come true as he has grown up watching Gators and supporting the team. This team is quite close to his heart as he has spent most of his childhood in Gainesville, Florida. He has fond childhood memories of playing football with his father and siblings in the backyard of his Gainesville home.