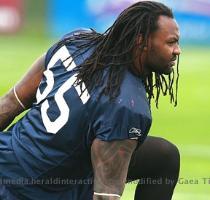 FOXBOROUGH (GaeaTimes.com)- National Football League on Friday announced that it has suspended Brandon Spikes, the New England Patriots rookie linebacker for breaching the NFL rules on performance-enhancing substances. He has been suspended for four games. However, they chose to remain secretive about naming the substance. The league said that the suspension order for the prohibited substance is immediate, right from the next match between the New England Patriots and the Chicago Bears on Sunday.

According to the reports Brandon Spikes will make a comeback in his team on January 3 in the team’ regular season against the Miami Dolphins. If the New England Patriots succeed in qualifying for the post season, then Brandon Spikes will be allowed to play in all of the playoff matches. However, Brandon Spikes regarding his involvement in this latest scandal said that he did not take any performance enhancing substance. According to the rookie linebacker it was a part of his medication and not nay illegal drug. He claims that he did a mistake by not getting it clarified. Spikes said that had he got it clarified the results would not be like this.

Brandon Spikes also added up that the integrity that the game holds is of utmost importance to him. He has apologized to his team mates and his fans and to the entire New England Patriot’ organization for his mistake. He has said that he does understand the rules and regulations. Wish he would have had a better understanding of it before he involved himself in the prohibited domain. His suspension from Tuesday onwards clearly indicates that he will be facing loss of pay for four weeks which will cost around $75,294.12.