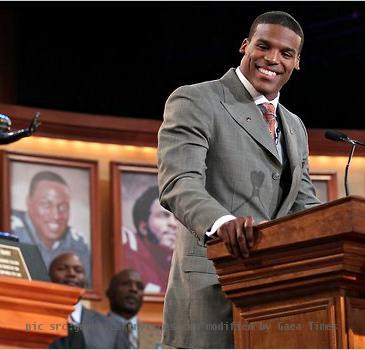 MANHATTAN (GaeaTimes.com)- Auburn Tigers quarterback Cam Newton was declared the winner of the prestigious Heisman Trophy yesterday and with this feather in his cap, the player emerged clear out of the controversy surrounding him lately. The award ceremony which is usually an excitement filled one proved to be rather muted this year. Cam Newton accepted the trophy and his proud mother watched his son accepting the trophy. The player smiled and then bowed his head as his name was announced. However, there was nothing very intense or emotional about the event.

Cam Newton won more than 82 percent of total votes to emerge triumphant in the gala ceremony that was held last night. At second placed was Andrew Luck who is the Stanford quarterback. The third spot went to LaMichael James, the running back of Oregon Ducks. As a matter of fact, Cam Newton had to face a number of hardships in his professional life this season but he proved that he has the guts to face them and emerge as a winner. At least the voters did not get affected by the NCAA investigation. A reporter asked the Auburn quarterback whether he would return the Heisman Trophy in future if his name gets in some other controversy. He replied in the negative.

Cam Newton has played consistently well this season and that has gone a long way in winning the trust of the fans and his teammates. His father stayed away from the award ceremony to evade any further controversy but his mother was there at the Heisman ceremony. It is likely that the scrutiny on him will remain for some time even though the NCAA investigation did not find anything amiss about him.

CIOL (Cyber India On Line) broke out this interesting story about adult website that I would like t...

The much awaited business centric smartphone Nokia E7 is slated to start shipping on December 20...

3 things to look for before buying your first Camcorder

Getting your first camcorder could land you into trouble as there are lots of choices in front you; ...

LONDON - Not a single member of Fabio Capello's World Cup squad has made the 23-man shortlist for...

MUMBAI - From the autobiography of a plastic bottle to a day in the life of a blind Mumbaikar, movie...

NEW YORK - An aspiring model in the US has sued an app-maker and Apple for making her an internation...

It's time to wake up and give you a pinch as the HP Slate is finally official at the price o...
Copyright© 2010 The Gaea Times