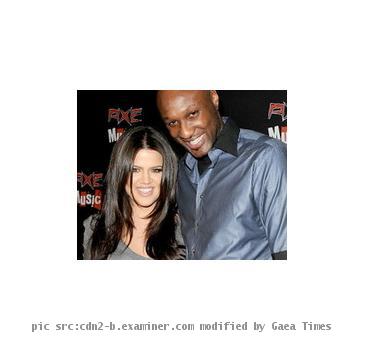 LOS ANGELES (GaeaTimes.com)- Los Angeles Lakers star Lamar Odom is hitting headlines lately for reasons other than his sporting prowess. If recent reports are to be believed then the noted NBA star has filed a lawsuit against his former girlfriend Liza Morales over support and visitation rights of the former couple’s two kids. It has been reported that Lamar Odom took legal action against his ex-flame on November 5 when he filed a lawsuit at the Manhattan Supreme Court urging the judge to ensure a better ‘parental access schedule’ as well as ‘reasonable child support’, a reputed news source has claimed.

However, the concern of the Los Angeles Lakers forward’s for his two kids has come as a quite a shocker to his former girlfriend Liza Morales who has claimed that she literally had to beg Lamar Odom to give proper attention to the kids as a father. While responding to the lawsuit, Liza Morales has alleged that the 31-year-old basketball star checked out as a father almost four years ago while adding that the kids, 12-year-old daughter Destiny and son L.J, 9 have been deprived of a quality time with their father for a long period of time.

Liza Morales‘ relationship with the highly-acclaimed Los Angeles Lakers star cam to an end in the year 2006 soon after the couple lost their six-month-old son Jayden to infant death syndrome. Lamar Odom’s former girlfriend also went on to claim that during the moment of tragedy, she has to come to terms with the grief all by herself as the basketball star was no where around. Since then Lamar Odom is known to have dated celebutante Khloe Kardashian whom he married last year.

LOS ANGELES (GaeaTimes.com)- The media was abuzz yesterday with the news that "Desperate Housewi...

Liza Minnelli feels 'sad' for LiLo as she battles her addictions

LONDON - Iconic entertainer Liza Minnelli admits she can empathize with Lindsay Lohan as she battles...

WASHINGTON - Lindsay Lohan has checked into the most famous treatment-center-to-the-stars, Betty For...

Liza Minnelli cancels concert in Maine because of illness; organizers hope to reschedule

New York, Sept 29 (ANI): Liza Minnelli sure knows how to laugh at herself. According to The New Yor...

NEW DELHI - The autobiography "Tony Blair: A Journey" continues to be number one in the non-fiction ...

Out of studio tapes of Liza Minnelli set for release

New York, Sept 20 (ANI): When singer Liza Minnelli decided to pop over to her neighbour's house...
Copyright© 2010 The Gaea Times