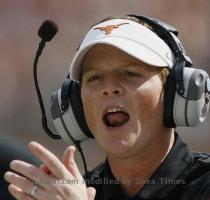 Although nothing has been confirmed as of now, that has not barred the numerous speculations rising after it got confirmed that Will Muschamp is the new Florida Gators head coach. Another source was seen posting in his Tweeter account about the latest buzz that the assistant head coach of Texas will shortly be joining the Florida camp. However, there has been no confirmation from the side of Major Applewhite himself. The way Texas Longhorns right now is losing a lot, there is a high chance that the rumor might turn out to be true. If this turns out to be true, Texas Longhorns will receive the receive latest blow.

Major Applewhite was previously a Texas Longhorns quarterback from 1998 - 2001, when he had set some record winning streaks for his team. After that he assumed the role of an assistant in the team. Later on his shift to the Syracuse Orangemen saw him as the quarterback coach for one of their toughest season in 2005, where the Orangemen created the worst record in the result of school history. He has also been the offensive coordinator at the Rice University and at Alabama. In 2008, he made a comeback at the Texas Longhorns as the assistant head coach and the running backs coach.

Rebel leader nabbed in Meghalaya, abducted official to be freed

SHILLONG - A top commander of the Meghalaya rebel outfit Garo National Liberation Army (GNLA) has be...
Copyright© 2010 The Gaea Times