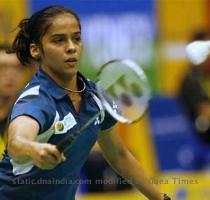 WAN CHAI, HONG KONG(GaeaTimes.com)- This is one good piece of news for all the Indians as Saina Nehwal has once again made us proud after she defeated World No.5 Chinese badminton player Shixian Wang today in the final match of the Hong Kong Super Series 2010. She beat her Chinese rival by 15-21 21-16 21-17 to claim the series title. This is the ace shuttler’s fourth super series title. She defeated Shixian Wang after a tough clash on the badminton court lasting for one hour and eleven seconds. Finally, the 20-year-oldIndian badminton ace did make it happen.

Shixian Wang made her way for the finals after she beat her Chinese companion and top-seed Xin Wang for 21-13, 21-14 in the second semi final on Saturday, dismissing the match in just 31 minutes. Saina Nehwal who is second seeded and ranked as World No.4 crushed the world ranked No. 6 German, making her way as the only Indian to reach the finals of this tournament. Others like Arvind Bhat, Parupalli Kashyap and Gurusai Datt in the men’s category have not been able to make it to the top. Today, she just stormed into the court against Shixian Wang and successfully came out with an upper hand in the final match.

Right now after winning today’ final match, Saina Nehwal has her hands full with back to back victories. She also won the Indian Open along with the Singapore Open and the Indonesian Open Super Series earlier this year. No doubt all her fans are having a gala time. She also won the gold at the Commonwealth Games 2010, held recently in New Delhi. The much held youth icon of India has also made it as World No. 2 in terms of career-best ranking.