UFC 124 Fights Entertain To The Fullest 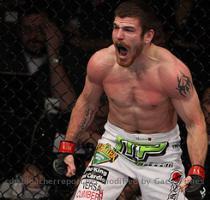 MONTREAL, CANADA (GaeaTimes.com)- The UFC 124 Fight matches gave a few more games of excitement to the fans who watched it last night. Every match had its own USP and highlights that made each of them memorable in their own ways.

In the first UFC 124 Fight main card match, Champion Georges St-Pierre defeated challenger Josh Koscheck with an unanimous decision of 50-45. The champion once again had his own strategy to bring the match under his control. He said that he knew Josh Koscheck loves throwing punches in a circular motion. So his game plan was to stay on the outside. When the champion saw the challenger’s eyes closed, he tried with hooks to finish it. Although it was a bit tough, the challenger finished the match with swollen eyes. Stefan (Skyscraper) Struve defeated Sean (Big Sexy) McCorkle in the co-main event. Initially, Sean McCorkle started in a high spirit with kimura shoulderlock. However, the champion remained calm and kicked the cage wall to have his initial escapes. Soon, he was back with a bang with kimura sweep, to mount his opponent, landing some more punched to emerge victorious.

Charles (do Bronx) Oliveira faced the first loss of his career from Jim Miller quite submissively. The champion said that a lot of people underestimated him before the match and he proved them wrong. He also said that although Charles Oliveira is a tough guy, Jim Miller is one of the best in the world. TUF winner Joe (Daddy) Stevenson, faced another humiliating defeat from Mac Danzig, as he landed a few timely hook on the loser. Mac Danzig was quite satisfied with his strategy as he said that he had been trying for years to get this technique correct and this time he applied it successfully on a champion like Joe Stevenson in UFC 124 Fight.

UNITED NATIONS - The Pakistan Mission has forwarded to the United Nations the Pakistani Cabinet's re...

ISLAMABAD - Shocked by the US support for India's bid for a permanent seat in the United Nations' Se...

Brock Lesnar Vs Cain Velasquez Ends In The Former's Loss

ANAHEIM, (GaeaTimes.com)- It was not a good day for the reigning king of UFC Championship, Brock L...

LOS ANGELES (GaeaTimes.com) Arianny Celeste is a bit upset that the surprise which she had plann...

Arianny Celeste Furious Over Illegal Scanning of her Hot Photos

LOS ANGELES (GaeaTimes.com) -- Arianny Celeste, the supermodel in the Playboy magazine and a pop...
Copyright© 2010 The Gaea Times