Dan Henderson Is Back With A Bang 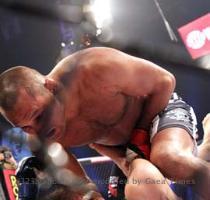 ST. LOUIS (GaeaTimes.com)- Dan Henderson made a remarkable comeback yesterday, as he defeated his opponent Renato “Babalu” Sobral for the first time in ten years. The main card of Strikeforce match took place at the St. Louis. This match delivered the champion from his embarrassing loss to Jake Shields.

Dan Henderson’s loss to Jake Shields was rather boring with a five-round decision loss. Many people say that he was defeated because that was a middleweight championship match. Whereas, records show that Dan Henderson is more comfortable with heavyweight, and clearly has knockout power. The match between Dan Henderson and Renato “Babalu” Sobral did not last for too long. It was just a matter of 1:53 of the main event, and the latter was knocked down right in the first round. The first minute of the match was not productive at all. It only involved the two fighters rotating around each other without any attempt to land a strike. Therefore one may say, that it took only 53 seconds for Dan Henderson to knock down Renato Sobral. It took no time for him to push him towards the fence and make him lose its balance. Renato Sobral did the biggest mistake by grabbing the champion’s legs in order to gain back his composure. However, this move only facilitated the champion to get a better balance and a strategic position, that enabled him to throw Renato Sobral right on the floor. Thereafter, all he had to do was get upon him and land a few more punches to leave his opponent immobile and emerge himself as the winner.

After the match, Dan Henderson said that he would like to stay at light heavyweight, as that is his comfort zone. However, he is also open to alternate decisions that would be taken by Strikeforce and their CEO Scott Coker. All he is concentrating upon right now, is to win all the upcoming matches and sustain his good performance.

NEW YORK - 'Harry Potter and the Deathly Hallows: Part 1', made a grand opening with 330 million dol...

MELBOURNE - Coming directly from the sci-fi movie, the US army has the a lethal combination of...

LONDON - Playboy magazine is all set to auction off some of its most well known images featuring som...

NEW YORK - A restaurant-with no light and blind waiters serving French cuisine-is as safe as a norma...