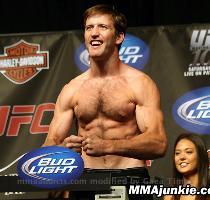 LAS VEGAS (GaeaTimes.com)- Stephan Bonnar was seen making a comeback after a long time after the decision went in his favor at the “The Ultimate Fighter 12 Finale”. Audience witnessed the mixed martial artist’s comeback after three straight losses that he suffered in the the season ranging from 2009 to early 2010. It seemed that Stephan Bonnar was walking away from the fight career after he lost out to Forrest Griffin but the last finale of the reality show on a reputed channel once again marked his comeback.

The acclaimed fighter had rebounded in a good way after his achieved victory over Krzysztof Soszynski. Once again. he made his way through Igor Pokrajac with the aid of an unanimous decision, where he lead 29-26 on the cards. According to sources, Stephan Bonnar was in excellent shape and those present at the venue witnesses him making his way through a tough fight that was thrown on the ring by opponent Igor Pokrajac. It was seen that he worked carefully from full guard, half guard, and side control through out the fight, going on to add some bad shots. However, he too received hurt under his left eye.

Igor Pokrajac also made two illegal knees on his opponents head. He was back in the second round with Stephan Bonnar in the north-south position. Igor Pokrajac started throwing knees without even taking note of the fact that where would they land up. This led referee Steve Mazzagatti snatch a point away from him. The fight ended in an abrupt way with Bonnar pounding away at Igor Pokrajac, giving him two punches in the head. The referee tried to stop that and with the remaining one second the horn came up.

LONDON - Camping out has always been a great experience, and now campers can enjoy it even ...

VIENNA - Paris has its bistros, London its pubs, Rome its wine bars and Vienna its coffeehouses. ...

LONDON - A website to mark the life of late Stephen Gately has been launched on the first anniversar...

No. 4 Oregon falls behind early before taking over to beat No. 9 Stanford 52-31