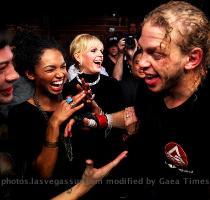 LAS VEGAS (GaeaTimes.com)- Jonathan Brookins was pumped up with the spirit of celebration as he won over Michael Johnson in the last The Ultimate Fighter 12 Finale in Las Vegas, with an unanimous decision victory in just three rounds. His score card read 29-28, 29-27 and 29-28 for the light weight title.

After the victory all that Jonathan Brookins wanted to do is celebrate his victory with his family. The champion however does not want to make a big issue for his victory. He said in an interview that he still wants to be remembered as “the guy who fought Jose Aldo once”. He also said that several people frequently bring that up, as he is more popularly known for the massacre of that particular fight. Jonathan Brookins has slowly started accepting that he is more recognized for that particular event, and has started enjoying that too. However, he was also happy with this victory and with a whole lot of humility, he said that he still has a lot more to improve. Winning against Michael Johnson was not a big surprise for him. He said that even in his house, he was the best athlete, who was anticipated to have a long career in the field of sports.

LONDON - Jonathan Trott, who has been dubbed as England's most controversial and annoying player, ha...

WASHINGTON - A new study has pointed out that living in a deprived area increases the risk of ...

LONDON - Scientists are analysing fossils of a 200 million-year-old reptile of the late Trias...

LONDON - Holywell, a town in Britain, plans to set up a "star boulevard" with names of famous locals...

Antimatter atoms trapped and stored for the first time

LONDON - An international team of scientists working at CERN, the European Organization for Nuclear ...
Copyright© 2010 The Gaea Times