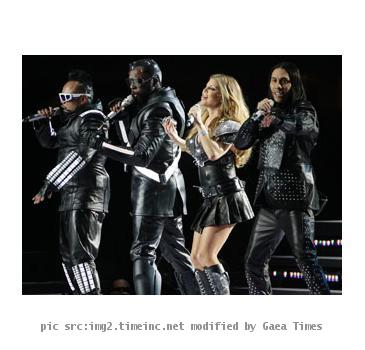 ARLINGTON (GaeaTimes.com)- Last night, Super Bowl XLV kicked off with felicity and fanfare at Cowboys Stadium in Arlington, Texas. The much-anticipated occasion was graced by the renowned celebrities of America who entertained the audience and boosted the spirit of the players. American hip-hop group Black Eyed Peas performed during the halftime of the game between Pittsburgh Steelers and Green Bay Packers, the singers delivered a wonderful show with their popular songs, mind-blowing dancers, and obviously surprise appearance from their friend Slash and Usher. The lights, the futuristic costumes, and the music gave the audience an outstanding feeling and made it a magnificent show.

Fergie looked completely mesmerizing with her glistening shoulder pads and a black dress. Black Eyed Peas kicked off their performance with their 2009 smash hit “I Gotta Feeling”. The crowd roared with applause as they were blown away by the start. The foursome of Black Eyed Peas were in their “Tron” like attires and the cluster of dancers in their white body suits made the Super Bowl halftime show worth watching. The group then sang another hit song ‘Boom Boom Pow” and the stadium were illuminated by glowing lights. One of the biggest attractions of the night was Slash’s performance in “Sweet Child O’ Mine” with Fergie.

After Slash, the second guest performer of the night was Usher and will.i.am assisted him in “OMG” song. Black Eyed Peas’ “Where Is the Love?” was loved and appreciated by all the audience and they cheered for their favorite band. The band then played their recent hit “The Time (Dirty Bit)” where the backup dancers joined the singers with attractive helmets and made the half time Super Bowl show pleasant. The platinum-selling Black Eyed Peas wrapped their performance with “I Gotta Feeling”.

MELBOURNE - Video footage of a topless young boy resisting a pat down at a US airport has sparked ou...

NEW DELHI - Encouraged by the recovery of the art market after a slowdown of 30 months, a leading Ba...

NEW DELHI - Research in Motion, the Canadian company that makes BlackBerry devices, has denied any l...

LONDON - Miley Cyrus was spotted in a very public clinch with new boyfriend on her 18th birthday bas...

Arrested home ministry official to be produced in court

CHANDIGARH - It's the old VAT 69 in a new bottle. The premium drinks brand has got into a new shape ...
Copyright© 2011 The Gaea Times