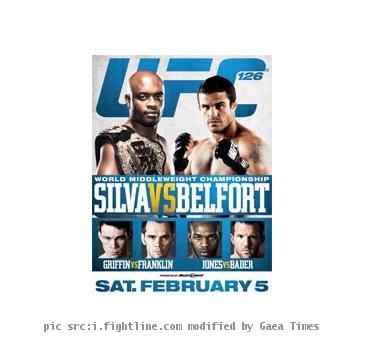 LAS VEGAS (GaeaTimes.com)- Much anticipated Ultimate Fighting Championship (UFC) 126 was aired on Spike TV and it turned out to be an entertaining one. The audience of Mandalay Bay Events Center in Las Vegas cheered for their favorite fighters as the nail biting bouts progressed. According to some bloggers, last night’s show can be called as a highly entertaining thriller and one of the main attractions of the fight was the Main Card’s bout between Anderson Silva and Vitor Belfort where the former defeated the latter via Knock Out.

In the Preliminary Card of UFC 126, Mike Pierce defeated Kenny Robertson in Welterweight bout. The fight was quite interesting as Mike Pierce thrashed his competitor just in round 2 (TKO punches). The fighters of United States, Ricardo Romero and Kyle Kingsbury competed against each other and the latter defeated Ricardo Romero via Total Knock Out in the Round 1. In the post match interview, Ricardo Romero said that the winner had the upper hand in the fight most of the time and he was beaten up badly in the bout. The other winners of the Preliminary Card in Lightweight bout, Bantamweight bout and Featherweight bout are Paul Taylor of England, Demetrious Johnson of United States and Chad Mendes, respectively.

However, the audiences were waiting eagerly for the Main Card fights of UFC 126. In the Bantamweight bout, Miguel Torres crashed Antonio Banuelos via unanimous decision. However, the winner praised his opponent after the bout and he said that Antonio Banuelos is a “tough” player. However, he added that he was stuck to his game plan, which made him win the tough fight. The champions of other bouts are Forrest Griffin of United States (Light Heavyweight bout) and Anderson Silva of Brazil (Middleweight Championship bout).

UNITED NATIONS - The Pakistan Mission has forwarded to the United Nations the Pakistani Cabinet's re...

ISLAMABAD - Shocked by the US support for India's bid for a permanent seat in the United Nations' Se...

Brock Lesnar Vs Cain Velasquez Ends In The Former's Loss

ANAHEIM, (GaeaTimes.com)- It was not a good day for the reigning king of UFC Championship, Brock L...

LOS ANGELES (GaeaTimes.com) Arianny Celeste is a bit upset that the surprise which she had plann...

Arianny Celeste Furious Over Illegal Scanning of her Hot Photos

LOS ANGELES (GaeaTimes.com) -- Arianny Celeste, the supermodel in the Playboy magazine and a pop...
Copyright© 2011 The Gaea Times