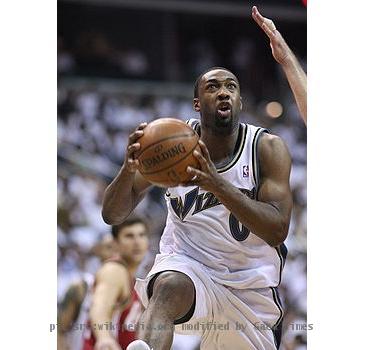 ORLANDO (GaeaTimes.com)- Orlando magic point guard Gilbert Arenas was left shocked on Thursday night after he was handed court papers by a process server which came from his former girlfriend Laura Mendoza Govan. The incident took place during th half time of the game between the Orlando Magic and the Miami Heat when Gilbert Arenas was leaving the court. As he headed towards the locker room, the process server managed to get close to the player and gave him them the documents.

From the copy of the court papers that has been obtained it has come up that the point guard’s ex-girlfriend Laura Mendoza Govan has filed a petition at a California court accusing the 29 year old point guard of having cut off the expenses that he should give her for the three children whom he fathered. Interestingly, Gilbert Arenas is also the father to the fourth unborn child of Laura Mendoza Govan. although the woman claims that Gilbert Arenas is escaping from his duties by not paying her the maintenance allowances, the star player himself has a different version. He has strictly denied the claims calling them false. He claims that he still pays Laura Mendoza Govan a monthly maintenance of $20,000, whereas her demand is of a $100,000. Thursday night’s incident was an open one drawing the attention of the public eye.

Otis Smith, Orlando Magic general manager said that it was really surprising that how did the process server managed to get so close to Gilbert Arenas. Lisa Fishberg, Gilbert Arenas’s attorney has also rubbished away the claims saying the player is kind enough to lend his support to Laura Mendoza Govan and the children.

LONDON - Judges have declared that Silvio Berlusconi's ally was indeed linked to Sicilian mafia and ...

KABUL - Archaeologists in Afghanistan have warned that they are racing against time to rescue a ma...

SAN FRANCISCO (GaeaTimes.com)- The Black Friday is just a few days away and the giant retailers ...

LONDON - A team of researchers at the University of Wisconsin-Madison have unveiled an inexpensi...

GURGAON - Laura Davies of England capped a dramatic week that began with a lost golf bag but ended w...
Copyright© 2011 The Gaea Times