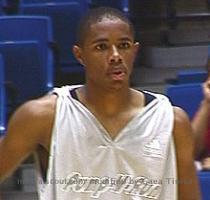 RALEIGH (GaeaTimes.com)- Junior point guard Larry Drew II rendered a severe shock to North Carolina after he recently announce that he was leaving the school and will be heading to another one. Although it has been confirmed that the 20 year old will no longer play for Tar Heels, the North Carolina basketball team, it has not been known which team is the next lined up for Larry Drew II. He recently lost his position to freshman Kendall Marshall.

According to sources, it was on Friday morning that Larry Drew II’s father, Atlanta Hawks coach Larry Drew called up North Carolina coach Roy Williams and said that his son had expressed his wish to discontinue it with North Carolina. He told the school team coach that it every thing that he conveyed was his son’s wish and had nothing to do with his own decision. His sudden not only has left Roy Williams upset, who infact admitted of it but also Larry Drew II’s recruiting class. Tyler Zeller, member of Larry Drew II’s recruiting class said that with only one month left in the regular season the decision had indeed left them somewhat ‘little stranded’ if not angry.

A source on the condition of anonymity divulged that the junior point guard left the school campus on Friday morning. His last tryst with North Carolina had been in Wednesday’s game where he assisted the team to a 106-74 victory against Boston College. In a statement issued by North Carolina after the announcement of the decision Larry Drew II said that he was leaving the school to continue his education and basketball career somewhere else.

WASHINGTON (GaeaTimes.com)- If Sarah Palin indeed goes ahead with her 2012 U.S. presidential bid...

LOS ANGELES, (GaeaTimes.com)- We all know that Larry Forgione is one of the best cooks in the Un...

WASHINGTON - The owner of a small firm in California confirmed Friday that he was the manufacturer o...

Mel Gibson 'warned' ex-lover about his 'dark side'

LONDON - Oksana Grigorieva has revealed that ex Mel Gibson warned her about his "dark side" at the b...