Sushil Kumar On A High 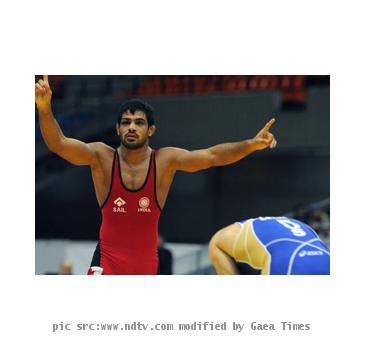 DELHI, INDIA (GaeaTimes.com)- The Prime minister of India Dr Manmohan Singh has congratulated ace wrestler Sushil Kumar for becoming the first wrestler from the country to bag the gold medal in Moscow’s World Wrestling Championships. The PM said that the wrestler has made the country proud and it is indeed a great achievement for him. The wrestler beat Gogaev Alan of Russia in the final to get the gold. The wrestler also added another feather to his cap two years back when he got the bronze medal at the Beijing Games.

In another development, Mamata Banerjee the Union minister for Railways has said that wrestler Sushil Kumar will be given an award of INR 10,00,000. The minister said in her statement that the layer achieved this spot with his dedication to the game and his determination to make the country proud. She also added that his victory has also made the Railways ministry feel proud. Incidentally the wrestler is the Assistant Commercial Manager in Northern Railway. The 27 year old wrestler is on a high after this historic win.

The wrestler however is not going to sit idle and bask in the glory of winning the gold medal. Sushil Kumar is now gearing up for winning at the upcoming Commonwealth Games which will be held in Delhi. His family members are extremely happy and proud of his achievement as anyone can understand. M.S. Gill the sports minister has also congratulated the ace wrestler on Monday. He has also said that the wrestler will win may more medals in future to add to his list of achievements.