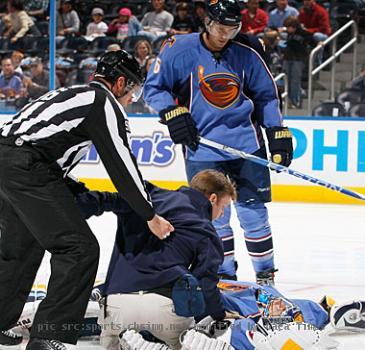 ATLANTA (GaeaTimes.com)- Although the Atlanta Thrashers were able to emerge triumphant against Washington Capitals during the National Hockey League season opener, the game did not turn out to be entirely pleasant for the winning team after Thrashers goalie Ondrej Pavelec collapsed just few minutes after the game commenced on Friday night. When the game kicked off yesterday night, the enthusiasm of the fans was palpable as they cheered boisterously to support their favorite teams. However, within minutes the charged up atmosphere at the Philips Arena took a grim turn when the 23-year-old Czech player suddenly lost consciousness.

Although the medical personnels present at the venue rushed to Ondrej Pavelec’s aid without any delay and tried their best to bring him back to his senses, they failed to do so. Consequently, the Atlanta Thrashers goalie was soon carted off the ice in a stretcher and was taken to a nearby hospital where preliminary tests were carried out which supposedly turned out to be negative. The team later issued a statement that divulged that the 23-year-old goalie was ‘awake, alert and asking for the score of the game’ while it was also mentioned that he was kept for observation overnight in the medical facility.

While talking about the incident, Atlanta Thrashers defenseman Zach Bogosian later added that Ondrej Pavelec’s collapse during the game was surely ’scary’ while expressing his relief that the goalie was now doing well and had regained consciousness. The 23-year-old Czech player became associated with the Atlanta Thrashers in the 2005 draft and he went on to sign a pro-contract with the team two years later.