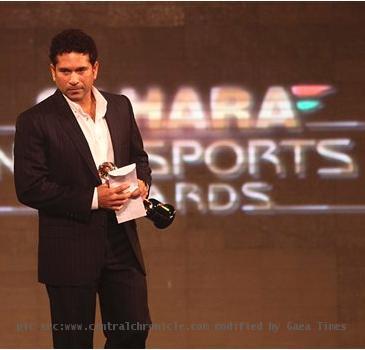 MUMBAI, INDIA (GaeaTimes.com)- The Sahara India Sports Awards 2010 which was held over the weekend in Mumbai turned out to be a glittering event with the who’s who of the world of sports as well as entertainment gracing the occasion. A number of sports-personalities from different fields were honored at the gala ceremony while the sporting prowess of many legends of the past was also remembered and recognized at the event.

While master blaster Sachin Tendulkar was named as the ‘Cricketer of the Year’, wrestler Sushil Kumar took home the award for ‘Sportsman of the Year.’ The awards night was also extremely special for five time world weightlifting champion M C Mary Kom who was bestowed with the honor of the ‘Sportswoman of the Year.’ The multi-sports extravaganza also witnessed some prominent names from other fields being conferred with the honor which included rifle shooter Gagan Narang who took home the best male athlete awards for his brilliant performance in the recently held Commonwealth Games 2010. While Gagan Narang was named the best male athlete, archer Deepika Kumari who had managed to reserve two gold medals in the Commonwealth Games 2010 was announced as the best female athlete during Sahara India Sports Awards 2010.

The ‘Cricketer of the Year’ award was not the only honor that was bestowed on Sachin Tendulkar, as the ace batsman was received the ‘Icon of the Millennium’ award. While reacting to the multiple recognition that had been conferred to him at the Sahara India Sports Awards 2010, Sachin Tendulkar said that it indeed feels great to win the awards at the grand function.