Manchester United Ready to rock in the New Year 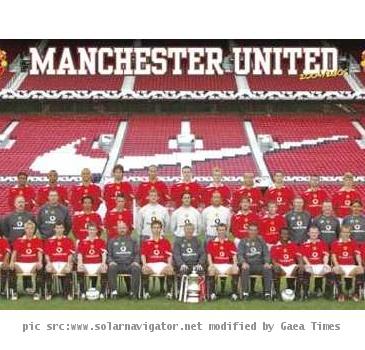 NEW YORK (GaeaTimes.com) — Manchester United midfielder Darren Fletcher says the side is ready to carry its recent good form into 2011.

After a slow start to the campaign, United have picked up steam through the season with a 7-1 thrashing of Blackburn followed by a fighting 1-0 win over Arsenal.

They currently stand two points clear of the Gunners with a game in hand and will play Sunderland at home on Boxing Day. The Black Cats are dangerous opponents, having taken Chelsea apart in a 3-0 win at Stamford Bridge, but Fletcher is confident the Red Devils can maintain their recent run.

LONDON - An expert at University of Reading, UK, is examining the use of nanotechnology to restore s...

Cancer was rare, but it did occur in Ancient Egypt: Scientist

LONDON - In a direct contradiction to a recent Nature article on cancer in Egypt, a Manchester Unite...

LONDON - The jury system might "not survive" if tweeting and the misuse of the Internet by jurors is...

Girls are held back by ladette culture: Cambridge University academic

LONDON - A senior academic from prestigious Cambridge University has stated that young women are so ...

Oxford students say they are worst behaved in Britain

LONDON - It seems like a long, long time when students at Britain's top university bragged about the...
Copyright© 2010 The Gaea Times