Zenyatta: Horse Of The Year 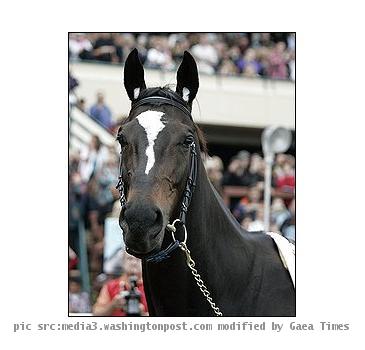 MIAMI (GaeaTimes.com)- Zenyatta and her owners have been waiting for this moment for the last two years. Despite her consecutive victories, in all the preceding races, Zenyatta always ended up being the runner ups in the last two Eclipse Awards. However, no one knew that although she lost her race in the November Breeders’ Cup Classic, the Horse Of The Year award was awaiting for this marvelous race horse.

In this award, she surpassed none other than colt Blame, whom she succumbed to in her first race defeat in November. She outscored him with 26 extra votes cast by the eligible voting members, who belong to Daily Racing Form, National Thoroughbred Racing Association and National Turf Writers and Broadcasters Association. Her owner, Jerry Moss said that this is indeed an overwhelming moment. However, he was also a bit shocked because, despite being one of the most “accomplished” horses with several consecutive victories, she was not acknowledges by the Eclipse voters in the last two years. For him Zenyatta is the most popular and important race horse in North America, in the last twelve months. He also feels that, it is his horse, that people love watching on TV, and look forward to her victory. Zenyatta co-owner, and Jerry Moss’ wife, Ann Moss was also over excited with this award. She said that all of them expected her to win in the last year and the year before that, as she is such a “Gift”.

Zenyatta won the award with 128 votes, while Blame got 102. The second runner up of this award was French horse Goldikova, who was the consecutive winner of the Breeders’ Cup Mile for the last three years. However, Jerry Moss also congratulated Blame, whom he considers to be an equally outstanding horse. He also thanked all the fans of Zenyatta, who have been sending her with post cards, letters, poems and gifts, to celebrate her victory.

LOUISVILLE (GaeaTimes.com)- It was a bad day for the most competent horse in Breeders Cup 2010...

LOS ANGELES, (GaeaTimes.com)- "CBS 60 Minutes" has always called some of the most wanted celeb...

INGLEWOOD (GaeaTimes.com)- The 6-year-old mare Zenyatta came out victorious in the Lady's Secret...

Zenyatta wins Lady's Secret to go 19-0INGLEWOOD, Calif. — Nobody beats the queen on her home track...

Jockey Randy Romero takes a long ride, with a lot of spills, to horse racing's Hall of Fame