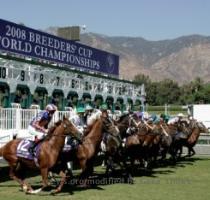 LOUISVILLE (GaeaTimes.com)- 2010 Breeders’ Cup ended yesterday with the most exciting results. They were unpredictable, thrilling and at times, disappointing. This especially holds true for the much awaited final race, Breeders Cup Classic, where Zenyatta was expected to make her third consecutive victory in the race, and the twentieth victory of her career. However, much to the disappointment of her fans, she emerged second, falling behind Blame by just a few inches.

2010 Breeders’ Cup results of the second day was more exciting. It opened with Juvenile Turf, which was won by Pluck to be followed by Soldat and Willcox Inn. Breeders’ Cup Sprint, was made more dramatic, with the victory of Big Drama, which shined Hamazing Destiny and Smiling Tiger. Chamberlain Bridge, Central City and Unzip Me emerged as the three respective winners of Breeders’ Cup Turf Sprint. The next race, Breeders’ Cup Juvenile Dirt, was entitled to Uncle Mo, with Boys At Tosconova coming second and Rogue Romance coming third. Breeders’ Cup Mile was won by Goldikova, after defeating the two other competent horses, Gio Ponti and The Usual QT coming second and third respectively. In the Breeders’ Cup Dirt Mile, Dakota Phone came first, Morning Line came second and Gayego came third. Breeders’ Cup Turf title was owned by Dangerous Midge, who surpassed the tough competition offered by Champ Pegasus, who came second and Behkabad, who was third. The final race of the 2010 Breeders Cup and probably the most awaited and expensive one, Breeders Cup Classic, was entitled to Blame. He made a history by not only challenging Zenyatta, but also not letting her go for the hatrick, in this particular race. Fly Down was the second runner up in this race.

The race was the most expensive one, as it involved a whopping money of $4,545,000. In 2010 Breeders’ Cup, no other results were as unpredictable or news worthy, as the results of the last race. The event marked the retirement of 6-year-old Zenyatta, who crowned her title to Blame so that he carries her legacy forward.