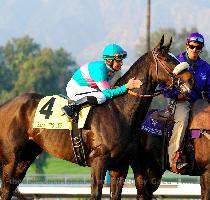 LOUISVILLE (GaeaTimes.com)- It was a bad day for the most competent horse in Breeders Cup 2010. Zenyatta, who was anticipated to make her third consecutive victory in the Breeders Cup Classic, lost her game to Blame, by just a few inches. Many people who were supporting her, which constituted the majority of the audiences, were disappointed. Yet their admiration and reverence for this graceful girl did not reduce even a bit.

The owner of Zenyatta, Jerry Moss, and his wife, Ann Moss, were quite confident about her and her defeat disappointed them to some extent. However, they were sympathetic towards her and said that they are still be proud of their “girl” as she has given her best shot. They also congratulated Blame, who proved himself to be more superior than the superstar, by outshining his toughest competitor and established his career. For her rider, jockey Mike Smith, it was tough to swallow as she started the Breeders Cup Classic with full spirit, and did her best, falling only a nose short. However, her defeat did not reduce her popularity by even a fraction. She has been nick named as “Best Female Horse” in the history of the sports, who surpassed her male competitors with full spirit and competency. Therefore, her last defeat cannot call for skepticism about her competency.

The rider of Blame, Garrett Gomez also agreed to that and said that he takes no pride to be the winner as Zenyatta still remains to be the best female horse in the Breeders Cup, who gave him the toughest competition possible. However, he is also proud of Blame who made it to the finishing line before her. She thanked the racing public who thought Blame to be efficient enough and gave him the best chance to prove himself.