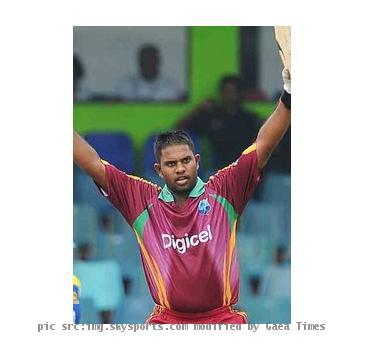 COLOMBO, SRILANKA (GaeaTimes.com)- To much disappointment, the first one day match between SriLanka Vs West Indies ended in no result due to heavy shower on Monday. West Indies’ rookie Adrian Barath earlier guided his team to post a total of 245/5 with his maiden century. But soon after heavy down pour played the spoilsport as the officials had no other option left but to cancel the match.

The three match series between SriLanka Vs West Indies was supposed to take place a month earlier but the tumultuous weather conditions of the nation forced the series to be delayed for a period of one month. The ardent cricket lovers who flocked in to catch their team battling it out against the West Indies in what is pitted as a crucial preparatory series just before the cup were left with huge disappointment. Earlier, the West Indies batsmen showed their grit as the team posted a competitive total of 245/5. Adrian Barath scored 113 of 129 balls with eight fours and two sixes. West Indies went off with a shaky start by losing wickets initially, but Ramnaresh Sarwan with his gritty knock of 75 along with Adrian Barath helped the team to post a competitive total. Both the batsmen were then dismissed by SriLankan paceman Lasith Malinga who ended up with figures of 3 for 51. The duo put up a 165-run partnership for the third wicket.

Soon after the innings got over heavy down pour forced the officials to call off the first one day match between SriLanka Vs West Indies. The next match is scheduled to take place in Thursday at the Sinhalese Sports Club, Colombo.

40 children down with fever after taking polio drops in Aurangabad

AURANGABAD - Around 40 children caught fever after they were administered anti-polio drops in Phulba...

GALLE, SRI LANKA (GaeaTimes.com)- A 'Gayle' swept over Sri Lanka and the worst affected by the...

SYDNEY - Australian fast bowler Mitchell Starc has said that his selection in the 15-man squad for t...

NEW YORK - It seems Madonna has moved on from her split with Jesus Luz. The Queen of Pop is said to ...

MUMBAI - An alert traffic constable here Thursday caught a man who had robbed his employer of Rs.20 ...
Copyright© 2011 The Gaea Times