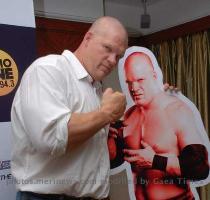 LOS ANGELES (GaeaTimes.com)- The SummerSlam pay-per-view game that was held at Staples Center in Los Angeles turned out with full of surprises for the viewers. During the SummerSlam 2010 event Kane was placed against Rey Mysterio, and after an exciting battle between the two, Kane was able to retain his World Heavyweight Championship Title over Rey Mysterio. However, more than the result of the SummerSlam event, it was the return of The Undertaker that excited the viewers on Sunday.

However, following the tradition of World Wrestling Entertainment, the SummerSlam Kane vs. Rey Mysterio fight came up with some surprises as well. As Kane went on to open the casket he had brought with him to the ringside to put Rey Mysterio in, all were surprised to find The Undertaker emerging from it. While at the beginning Undertaker charged Rey Mysterio, the latter eventually was able to prove his innocence and the wrath of Undertaker turned towards Kane who was projected as the culprit. However Kane was able to overpower Undertaker as well and the SummerSlam results for the event went in favor of Kane.