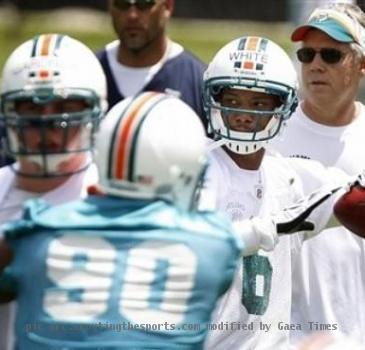 DAVIE (GaeaTimes.com)- Former Miami Dolphins quarterback Pat White has made the transition to another team but to the surprise of the fans he has signed up with the Kansas City Royals. Though, the baseball talents of the football player is well known to some of the fans, the transfer comes as a surprise for many as Pat White was seen as a bright prospect after he was picked in the second round drafts by the Miami Dolphins.

The Kansas City Royals have, however, shown great excitement at the footballer’s entry into the side. Lonnie Goldberg, the Director of Baseball Operations of the side has said that they are thrilled to see Pat White’s interest in playing professional level baseball. He explained that it is always good to have an athlete into the side. Pat White’s performance in the rookie season was not up to the mark and it was a matter of time that the player was released from the Miami Dolphins. The change in career could help boost things up for the young talent.

Pat White was also drafted by the New York Yankees last year but he insisted that he was more interested in football. Reports suggest that the minor league contract that the Kansas City Royals have signed with Pat White is flexible enough to allow him to go back to football if the NFL come calling. Considering that Pat White made just 13 complete appearances in the last season, it is unlikely that the player will have to make another transition this year. The news have reminded some fans of Bo Jackson, who was a legendary sportsman who had excelled in both the sports in his time.