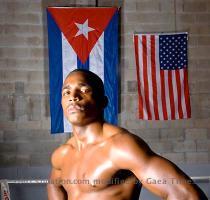 LAS VEGAS (GaeaTimes.com)- On Saturday night after a 12 round play, World Boxing Association featherweight champion Yuriorkis Gamboa was able to outpoint Orlando Salido and win the IBF title after a title unification bout. The bout that was held at Palms Casino turned out to be an exciting one as both the players came forward with some great play. At the end of the 12th round Yuriorkis Gamboa was declared the winner with the scoreboard reading 116-109, 114-109 and 115-109 in his favor.

However, Yuriorkis Gamboa’s play was marred with many fouls for which he was penalized twice. He was warned by referee Joe Cortez for holding the head of Orlando Salido during a clinch and also for later throwing a late punch. Two points from the scores of Yuriorkis Gamboa was deducted for hitting his opponent while he was down. After the win Yuriorkis Gamboa said to media sources that it was one of his greatest fights against a good opponent.