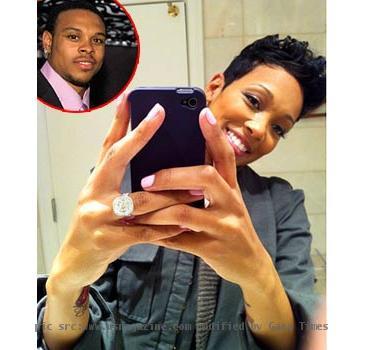 LOS ANGELES (GaeaTimes.com)- Basketball star Lamar Odom and his celebrity wife Khloe Kardashian are no longer the only high-profile couple that Los Angeles Lakers can boast of. According to sources, LA Lakers shooting guard Shannon Brown is following the footsteps of his team mate and is all set to tie the knot with noted R&B singer Monica. The couple who are said to have been dating for the last few months reportedly got engaged to each other over the weekend. An insider close to the couple has confirmed the news of the impending marital nuptials between the “Love All Over Me” singer and Shannon Brown to a reputed media source.

The news that the Los Angeles Lakers player and the celebrated musical artist have taken the decision to walk down the aisle gained all the more attention after Monica posted a picture of her stunning engagement ring on Twitter. The singer also went on to tweet that its a known fact that people would be having their own opinions but added that her real supporters would be happy for her while expressing her gratitude to them. The news of the bright new chapter in the lives of the R&B singer and Shannon Brown has been welcomed by the fans of the celebrity couple who are now waiting with bated breaths to know the exact date when the couple would be exchanging vows.

Apart from her professional singing career, Monica is known to hog the limelight for the ups and downs in her personal life. Before she started dating Shannon Brown, the “Boy Is Mine” singer is known to have separated from her longtime boyfriend Rodney “Rocko” Hill in October, 2009.