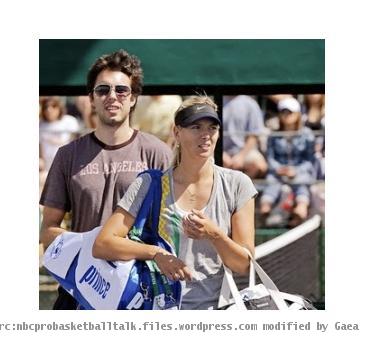 SAN DIEGO (GaeaTimes.com)- Los Angeles Lakers guard Sasha Vujacic has got engaged to ravishing Russian tennis star Maria Sharapova, the player divulged on Thursday night. Before the commencement of the exhibition match yesterday, the 26-year-old player told reporters that he is engaged to his girlfriend Maria Sharapova while adding that they are extremely happy about the bright new chapter in their lives. Although the fact that Sasha Vujacic and the 23-year-old tennis ace are now engaged has been confirmed by the NBA player himself, he did shed any light into the wedding preparations saying a date for the D-day has not been fixed as yet.

Despite the fact that Sasha Vujacic chose to be tight-lipped about the wedding date, the Los Angeles Lakers guard indeed revealed details about how he proposed to the love of his life. The 26-year-old player said that “It’s was probably old school,” as he had to ask the tennis ace to marry him in true gentlemen style on the day of their first-year anniversary. The pair has been romantically involved since last year after they first meet at a friend’s barbecue and soon love blossomed between them.

Meanwhile, an agent of the Grand Slam winner has also confirmed the news through an e-mail to a leading media outlet that the tennis player is all set to walk down the aisle with Sasha Vujacic after the couple got engaged recently. However, even Maria Sharapova’s representative refrained from revealing any kind of details about when the date of the wedding is likely to be set as well as the other wedding plans.