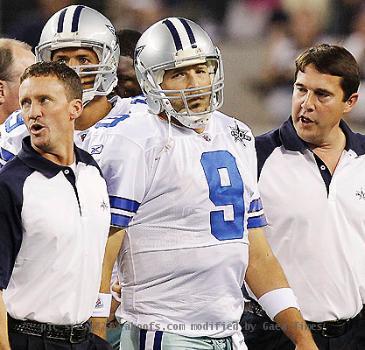 DALLAS (GaeaTimes.com)- Monday night’s game between the Dallas Cowboys and New York Giants turned out to be a highly forgettable game for the ardent followers of the former team. Not only did the Dallas Cowboys suffered a disappointing defeat in the hands of their opponents by 41-35, the team also lost its star quarterback Tony Romo who was taken off the field after he sustained a fractured clavicle during the second quarter.

As the game proceeded, the star Dallas Cowboys quarterback landed on his left shoulder on the turf while he was driven by New York Giants linebacker Michael Boley in the second quarter of Monday night’s game. After the hit, Tony Romo went down really hard on his left shoulder and stayed flat on his back until the trainers came to his aid. Before the half reached its conclusion, Dallas Cowboys officials divulged that the 30-year-old player has fractured his collarbone, to the utter dismay of his fans as well as his team. However, the player returned to the sideline during the second half while his arm was fitted in a sling and covered with a jacket. Despite being in the sideline, the star quarterback went on to encourage his team mates to give their best shot but there was surely not much to cheer about as his team failed to live up the expectations of its fans.

While reacting to Tony Romo’s injury, Jerry Jones, the owner and general manager of the Dallas Cowboys told reporters that the initial prognosis was estimated to be around 6-8 weeks which means that the star quarterback can make a comeback at the earliest in December.