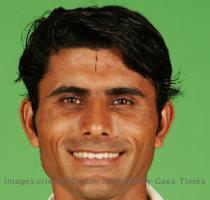 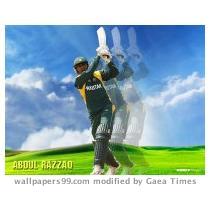 ABU DHABI, UAE (GaeaTimes.com)- Abdul Razzaq smashed one of the finest centuries in recent years to give Pakistan the series equalizer that never looked probable. Set a target of 287 to win by South Africa, the Pakistan innings never looked in the hunt till the middle order batsman created a miracle that included 10 sixes and 7 fours. Scoring a match winning 1098* off 72 balls, Abdul Razzaq proved yet again that the Pakistan team still has the ability to shock and awe opponents of any class.

South Africa won the toss and elected to bat first on a track that threatened to slow down with time. Hashim Amla, who has been a revelation in the one day side in recent years, played a classy knock of 65 that included 8 enigmatic boundaries. Colin Ingram took over soon and became the mainstay for his side that had set its sight on a 280+ score. With contributions from JP Duminy (54) the South Africans looked contented with their final score of 286/8.

Pakistan started slow and the top four batsmen never managed to look at ease against the resilient South African bowling attack. It was not until Shahid Afridi that the game started to have some balance and soon the fans realized that they would see some nail biting cricket when 87 was needed of the last 10 overs. South Africa began to assert themselves in the game gradually and the lower middle order along with Abdul Razzaq were looking at an uphill 53 off 24. A few miraculous overs later, it was just 14 off the last over and the hard hitter ensured that his side was home with one ball and one wicket to spare.