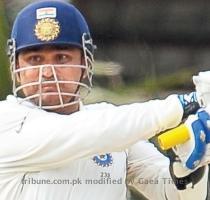 AHMEDABAD, INDIA (GaeaTimes.com)- The New Zealand bowling attack has found itself hopeless against the onslaught brought about by Delhi Daredevil Virender Sehwag in the first test at Ahmedabad. Coming fresh from the humiliating defeat against Bangladesh, the test series against India was New Zealand best bet as regaining some momentum before the 2011 World Cup. India’s upper middle order, however, ensured that the Kiwis are sent to the back foot right at the very start of their tour.

Choosing to bat first after winning the toss, the Indians got off to flying start courtesy Virender Sehwag and Gautam Gambhir. The fall of Gautam Gambhir was followed by the coming to crease of ‘The Wall’, Rahul Dravid and he played the perfect foil to the trailblazing Virender Sehwag. The opener looked set to become the 5th player to reach his century in the first session of the game but New Zealand skipper Daniel Vettori put the brakes on the innings with his consistent line. Post lunch, Virender Sehwag broke out again and scored a magnificent century. Rahul Dravid continue to provide support and looked focused to gain back his lost form in tests. Scoring at a strike rate below 42, Rahul Dravid is a strong contrast to Virender Sehwag who has already reached the 150 mark with a strike rate close to 100.

The only breakthrough for New Zealand came in the form of Gautam Gambhir’s wicket by Jesse Ryder. Going by the scoring rate and Virender Sehwag’s comfort level against the relatively inexperienced New Zealand bowling, it looks like the Kiwis will be staring at a huge first innings total by India.