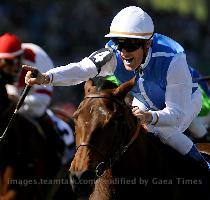 LOUISVILLE (GaeaTimes.com)- There was drama on the tracks of Churchill Downs on Saturday as champion racehorse Goldikova stole the show against the boys with her third straight victory in Breeders’ Cup Turf Mile. The 5 year old mare’s French trainer Freddy Head was left speechless by the performance of the mare and who later said in broken English that it was something unreal to him and he felt such things cannot be imagined even in the worst soap operas.

Goldikova started off rather tamely from the 10th post. With a quarter of a mile left to go and in the 6th position, Goldikova made full use of its momentum and burst ahead of the rest of the horses. 6th with 3/4th of the race over, it might never have occurred in the wildest dreams of the trainer that the mare would pull up so well. Proud Jockey Olivier Peslier said that at the moment Goldikova was the best filly in the world. Gio Ponti, the horse that finished 2nd by 1 and 3/4th margin, was one of the favorites to win the race after the great start. Gio Ponti’s trainer, Christophe Clement called Goldikova a ‘freak’.

Freddy Head was all praises for Goldikova after the race and said that the mare had everything that an athlete should possess. He explained that she has tremendous nerves and always seemed to have one more gear to her speed. After the win, Olivier Peslier celebrated what could be the last race for Goldikova by tossing the flowers at the audience as the winning mare walked into the winner’s circle.