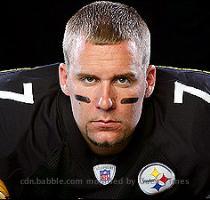 PITTSBURGH (GaeaTimes.com)- Some sources have come up with the unconfirmed reports that Ben Roethlisberger has got engaged recently. The lady with whom he has been hooked up with is Ashley Harlan, a resident of Hickory Township, near New Castle. Some sources have said that they are already engaged, while two of them have revealed that the couple would be tying the nuptial knot in July. However, Pittsburgh Steelers quarterback Ben Roethlisberger have himself refused to comment on the alleged rumor and so did his acquaintances.

This rumor has come up about 10 months after a 20 year old college girl accused Ben Roethlisberger of sexual molestation, in a washroom of a nightclub in Milledgeville. Her allegation literally spoiled his image and paralyzed his football career temporarily. NFL even suspended him from the upcoming six-game, for not abiding by the league’s policies of personal conduct. Later on the suspension was curtailed to just four games and he was back to the field as a better and more competent quarterback. Perhaps, that was the reason why Ben Roethlisberger refused to confirm whether he was engaged or not. He stated in an interview that many a times, the professional athletes are subjected to unwanted rumors, and that has been especially true in his case. Therefore, he would no more talk about his personal life, and keep the media away from him. As of now, his sole focus would be on the playoffs and he is trying hard to bag the super bowl.

However, it was not just Ben Roethlisberger, who wants to be inconspicuous about his engagement. Even Ashley Harlan’s parents, David Harlan and Gloria Harlan refused to state whether the couple is engaged or not. However, a neighbor has confirmed that they have been dating for quite sometime, but declined to comment any further.

Meet the Russian woman who paints with her 40E breasts!

LONDON - Amateur artist Victoria Romanova has come up with a novel way to paint - using her 40E brea...

LONDON - Actors Matt Damon and Ben Affleck are the latest stars to back a charity campaign to help h...
Copyright© 2011 The Gaea Times