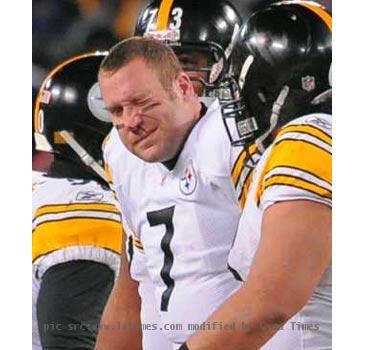 PITTSBURGH (GaeaTimes.com)- Pittsburgh Steelers quarterback Ben Roethlisberger injured his nose during the game against Baltimore Ravens that was held on Sunday. The much-acclaimed player was hurt in the first quarter of the game when he was hit in the face by the Baltimore Ravens defensive tackle Haloti Ngata although the player did not have to face any kind of penalty for his on-field actions. As soon as the Baltimore Ravens defensive tackle sacked the quarterback during the team’s first offensive series, the Pittsburgh Steelers player started bleeding making it clear that he had severely injured his nose. On Monday, a day after Ben Roethlisberger was hurt while playing for his team, the star quarterback underwent a surgery to fix his broken nose on Monday which went on smoothly without any glitches.

Although Ben Roethlisberger was taken into the sideline following the incident during the first quarter of Sunday night’s game where preliminary treatment was administered to his broken nose, he soon returned to the game and did not have to miss even a single play. With just moments into the game, the Pittsburgh Steelers quarterback delivered a nine-yard touchdown that cemented his team’s stunning 13-10 victory against the Baltimore Ravens.

Meanwhile, there is also some good news for all the ardent fans of Ben Roethlisberger as the star quarterback is likely to be back in action on Sunday night when his team clash against the Cincinnati Bengals. The 28-year-old noted player also underwent a nose operation in the month of June in 2006 when he sustained major injuries after being involved in a motorcycle accident.

Meet the Russian woman who paints with her 40E breasts!

LONDON - Amateur artist Victoria Romanova has come up with a novel way to paint - using her 40E brea...

LONDON - Actors Matt Damon and Ben Affleck are the latest stars to back a charity campaign to help h...
Copyright© 2010 The Gaea Times