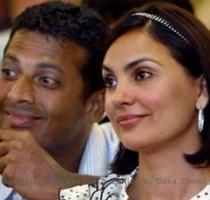 MUMBAI, (GaeaTimes.com)- The latest buzz in the B-town is about ace tennis player Mahesh Bhupathi and actress Lara Dutta who are all set to tie the knot. The wedding plans were revealed by the couple on television in the popular talk show “Koffee With Karan” as they engaged in a conversation with host Karan Johar. The wedding is scheduled to take place on February 19, 2011.

It seems like the soon-to-be husband and wife are at the pinnacle of their romance for the venue that they have chosen for their marriage reveals nothing else than that. The lavish wedding will be taking place in the romantic destination of Goa. The land of the serene waves, romantic beaches and coconut tress will act as the perfect setting for the newly married couple. Reports are claiming that the wedding is not going to be a hush-hush affair like many of the recent Bollywood weddings have been. Instead both Mahesh Bhupathi and Lara Dutta will have all their friends and family members joining them for the wedding ceremony. The wedding is likely to witness many from the film fraternity and from the sports arena as well.

The tennis player started dating the Bollywood beauty after splitting from ex-wife model Shvetha Jaishankar. After marital discord started cropping up between Mahesh Bhupathi and Shvetha Jaishankar, the two split, finally getting legally separated last year. Shvetha Jaishankar, however, had blamed the hot supermodel for being the main reason behind the problems in their marital relationship. On the other hand Lara Dutta seems to have found true soul mate in Mahesh Bhupathi even after being in a relationship with Kelly Dorjee for ten long years.

NEW DELHI - A 10-member team of political leaders, rights activists and academics will visit the tro...

GENEVA, SWITZERLAND (GaeaTimes.com)- Pope Benedict XVI's recent remarks about the use of condoms...

A knotty affair for Sara and Ali

MUMBAI - Were Sara Khan and Ali Merchant already married when they tied the knot again on reality sh...

NEW DELHI - Only 30 percent of Delhi's slum children make it to school beyond the age of 14. But def...

MUMBAI - On Friday, Bollywood actress Sushmita will turn 35 and she is planning an all-girls party i...
Copyright© 2011 The Gaea Times