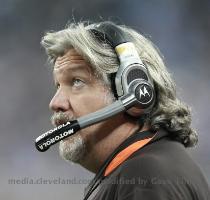 DALLAS (GaeaTimes.com)- It seems like the search for the Dallas Cowboys’s defense coordinator is coming to an end for latest developments in the Dallas Cowboys camp is hinting that they are going to hire Rob Ryan for the post. Although, no such official announcements have been made with regard to the news but a message on the Cowboy’s website indicates that the team has arrived at the decision to have the twin brother of New York Jets’ head coach Rex Ryan as their new defense coordinator.

On Friday, the Cowboys’ official website made it clear that the team has already given the offer to the 48-yea- old defense coordinator of the Cleveland Browns. The choice to have Rob Ryan as the defense coordinator is obvious since Rob Ryan has a long career of carrying out the responsibilities of a defense coordinator. A source close to the Dallas Cowboys camp revealed that after obtaining permission from Cleveland Browns to interview Rob Ryan, the team summoned him to their quarters where long discussions went on throughout Friday. The Cowboys have been in the look-out for some one to fill the position after Paul Pasqualoni on Thursday quit the team to become the head coach of UConn.

Before joining Dallas Cowboys owner Jerry Jones and head coach Jason Garrett for the meeting, Rob Ryan, reportedly, made sure that he spent a considerable amount of time at his soon to be new team’s practice facility. With things getting a little uncomfortable for him back at Cleveland after head coach Pat Shurmur decided to lead the team in different direction without him, it is not difficult to guess that Rob Ryan is in no mood to decline the offer.

I didn't kill her, says husband of slain Indian-origin woman

LONDON - The husband of the Indian-origin woman who was killed while honeymooning in South Africa af...

GHAZIABAD - A bride was robbed of gold ornaments and cash worth over Rs.2.80 lakh while she was goin...

LONDON - Patients suffering from AIDS in South Africa are unable to get right quantities of their li...

CHANDIGARH - The senior manager of a nationalised bank was robbed of his car and mobile by gun-wield...

WASHINGTON - A new research has found a mysterious link between the bones of ancient lizards found ...

Punjab, railways to tie up for building bridges

CHANDIGARH - The railway ministry has decided to sign a memorandum of understanding (MoU) with Punja...

Obama's 'Of Thee I Sing' book a hit among Brooklyn youth

NEW YORK - US President Barack Obama's first children book 'Of Thee I Sing' has proven to be qui...
Copyright© 2011 The Gaea Times