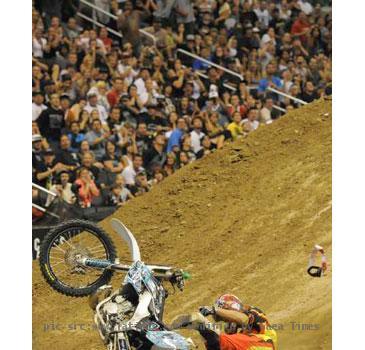 LOS ANGELES (GaeaTimes.com) — Paris Rosen, who rose to super stardom by posting a viral Motorbike stunt video in You Tube has been involved in a horrific crash.

Paris Rosen was seen last night crashing into the ground after attempting a Front-Flip. He was taken to a nearby hospital for immediate medical attention. His manager confirmed that Paris Rosen was able to move on his toes.

We will keep you informed about his condition as more news comes in.

A clip has appeared on You Tube that contains actual footage of the accident. Check it out now.

TATA-owned Jaguar to hire 1500 for production jobs, more in the offing

CAIRO/PARIS - French officials said Friday they would not have policies dictated to them by terroris...

LOS ANGELES - Basketball player Tony Parker has opened up about his split with Eva Longoria Parker, ...