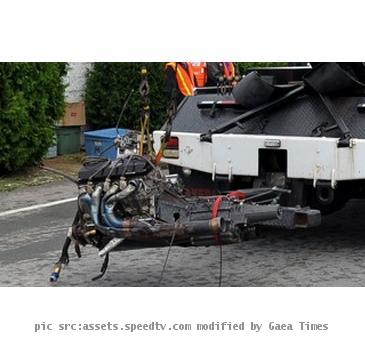 POCONO (GaeaTimes.com)- Lying down on his back on the Pocono asphalt, Elliott Sadler perhaps thanked God for saving him from a crash that might have ended up claiming his precious life. The car racer on Sunday walked away from a violent accident at Pocono Raceway where he was caught in a chain of crashes and accidents during the race. Elliott Sadler’s No.19 Ford hit the guardrail on lap 165 and the impact of the hit was so severe that the engine of his No.19 Ford flew out.

However, replay of the accident video footage did not show clearly which car had hit the No.19 Ford of Elliott Sadler. Elliott Sadler mentioned afterward that he could only see smoke and a “car going sideways” before the he was hit from behind and slammed into the guardrail. Elliott Sadler however said that he is doing fine except for a little sprains that he has suffered due to the accident. The racer said that the new cars are built to be safer and that if he was able to walk out alive from the Sunday accident then all kudos to the designer of the car. Elliott Sadler added, “It was probably the hardest hit I’ve ever had in a race car.”