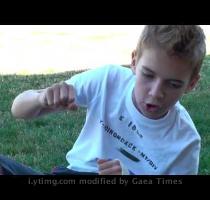 INDIANAPOLIS (GaeaTimes.com)- Aug 29, Sunday, could be marked as the darkest day in the history of the 101-year-old Indianapolis Motor Speedway as Peter Lenz, a 13-year-old motorcycle rider lost his life during a warm-up lap before the day’s first race at the Indianapolis Speedway. Peter Lenz who fell off his bike and was run over by another fellow competitor died several hours later in the hospital bed. The Marion County coroner’s office said that the budding motorbike racer had died from blunt force trauma. More details about the death of Peter Lenz is expected to be released on Monday after the coroner’s office receives the autopsy report.

The tragic death of Peter Lenz which overshadowed the whole event happened during the early warm-up session before the beginning of the race. Peter Lenz reportedly fell off his motorcycle and was run over another motorcycle that was being driven by a 12-year-old rider. Medical workers on field immediately rushed to the injured and place him in the neck brace. He was put on a stretcher and paramedics continued with chest compression while Peter Lenz was rushed to the hospital. However, Peter Lenz failed to recuperate from the injury and was declared dead after several hours.

Peter Lenz’s death is the first on the Indianapolis Speedway track since October 2003 when IndyCar driver Tony Renna died during a test ride. A posting on Peter Lenz’s Facebook page on Sunday declared the sad news of Peter Lenz’s death. The posting that was done by the deceased’ father, mentioned that Peter Lenz “passed doing what he loved”. The post befittingly held that the world lost one of its “brightest lights”.