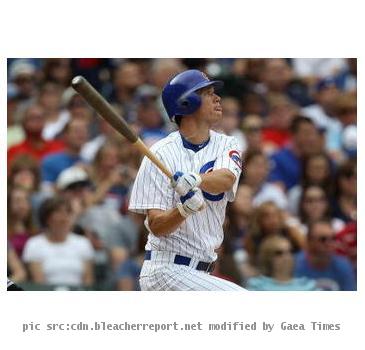 CHICAGO (GaeaTimes.com) — Post an un-imaginable accident that took place on field, Tyler Colvin is done for the season.

Tyler experienced that most awe-inspiring event of his life on-field as remnants of a shattered bat almost stabbed him to death. The bat-fragment almost ripped apart his skin and caused him injury. He was quite taken aback by the incident and is planning to take his leave from the game, this season.

In an exclusive interview Colvin told,

You never want to have a season end early, and I’m disappointed that I’m not going to be able to make it through the finish line with the rest of my teammates, That being said, I couldn’t be more thankful for the Cubs organization, my teammates and the opportunity to play for Cubs fans my rookie season. Thank you from the bottom of my heart.

Post the embarrassing incident the video footage has been flooded over the web. Reportedly, Youtube where numerous footages of the incident were uploaded has put a ban on the videos due to copyright issues. Also, there are whole lot of fake videos which are being shared.

All of this took place on Sunday’s match. Tyler Colvin was on third when Cubs catcher Wellington Castillo hit a broken-bat double to left. Colvin was watching the ball, and then turned to head for home. The sharp end of Castillo’s busted bat hit Colvin under the collarbone. He was hospitalized for pneumothorax, which occurs when a person has air trapped in the space between the outside of the lung and inside of the chest wall. The air enters the space when there is a hole in the surface of the lung, which allows air to leak from the lung and into the space.