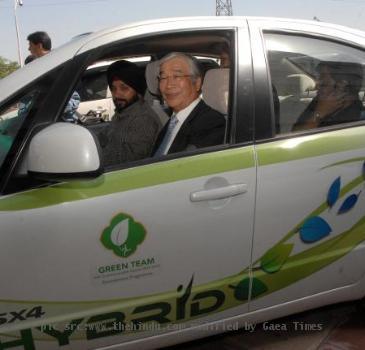 DELHI, INDIA (GaeaTimes.com)- Delhi government is trying its level best to ensure that the Commonwealth games which will start in a few days and after facing flak from the participating countries over the shoddy management at the athlete’s villages the government is trying hard to cover up the glitches. The government got a shot in the arm after leading car maker of India Maruti Suzuki handed over two hybrid models namely the SX4 Hybrid along with the Eeco charge. Another lot of environment friendly cars made by the company will be delivered to the government soon. These eco friendly cars will be used during the upcoming games. The company has made 14 such eco friendly cars meant for the games.

Shinzo Nakanishi the CEO and Managing Director of Maruti Suzuki India Limited said that he is elated since the engineers succeeded in making those cars within the deadline. He also said that the company is glad to be a part of the Commonwealth games. The development of electric and hybrid cars is among the key initiatives taken by the company to give a boost to its R&D capabilities. The CEO also said that the company will play a pivotal role in introducing green technologies in the automobile industry.

Maruti Suzuki India said that its team of 25 engineers were involved in this project to make 14 hybrid cars for the Commonwealth games. The concept version of these cars was earlier inaugurated at the Delhi Auto Expo 2010.The company has claimed that the hybrid model of SX4 will offer 25 percent better fuel economy compared with the fuel based conventional model.