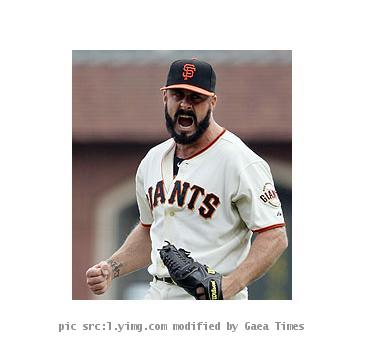 PHILADELPHIA (GaeaTimes.com) — The fans of the baseball team San Francisco Giants are rightly cheering the team with the slogan “Fear the Beard”. Giants closer Brian Wilson is proudly flaunting his unusual dark black beard all over his chin.

Brian Wilson is least cared to shave his beard and why will he do such a thing? His beard has become a rage among the fans. His lumberjack styled outgrowth is now a mark for the Giants. People are seen sporting fake beards as a part of cheering the team as Giants will face the NLCS for the first time in seven years.

Brian Wilson is a strange man with strange impulses. His beard is dyed pitch black that complements his mohawk style. His amazing image is making his fans crazy. The weird style of his beard with his lighter colored hair is a style statement now.