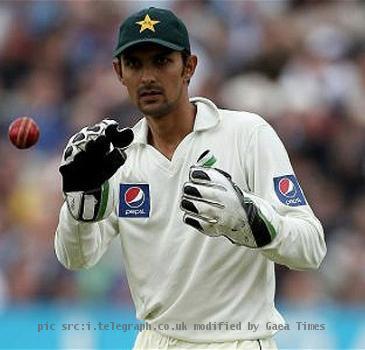 LONDON, UNITED KINGDOM (GaeaTimes.com)- An English village cricket club has given an invitation to Pakistani cricketer Zulqarnain Haider to join the club after the 24-year-old player announced his retirement from international cricket supposedly to make a stand against match-fixing. The Lashings World XI made the offer on Friday saying that it would love to have the wicketkeeper playing for the club in the upcoming 2011 season. Zulqarnain Haider’s contract with the Pakistan Cricket Board has been canceled after the player quit international cricket supposedly after receiving death threats ahead of the fifth and final ODI of Pakistan against South Africa in Dubai earlier this week.

David Folb, the chairman of the Lashings World XI has revealed in the official website of the club that the organization has attempted to contact Zulqarnain Haider by a number of means while adding that the doors of the club are always open for him. At the same time, David Folb also went on to say that they are eager to help the 24-year-old Pakistani cricketer as he would feel at home with the club. If Zulqarnain Haider intends to accept the offer of the English club then he would not be the only Pakistani cricketer to be recruited by Lashings World XI who has earlier employed Rashid Latif, the former Pakistani wicketkeeper who also refused to be associated with match-fixing.

In the meanwhile, Zulqarnain Haider is seeking political asylum in United States after he fled from Dubai just hours before his team was all set to clash against South Africa in the deciding fifth and final ODI. Without informing his team, the 24-year-old Pakistani player arrived in Dubai after supposedly getting death threats from match-fixers.