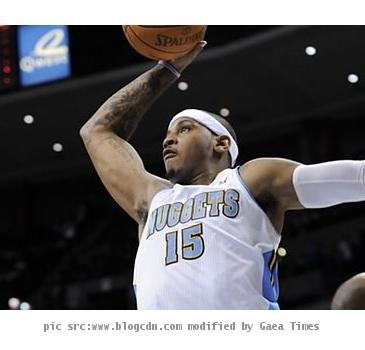 DENVER (GaeaTimes.com) — Tuesday Denver’s KMGH-TV, channel 7 reported that Nuggets have agreed to sell their star forward Carmelo Anthony to New Jersey. But, the report was immediately shot down by the Nuggets.

Just after the revelation of the news, vice president of basketball operations Masai Ujiri told FanHouse that it’s totally false and Anthony will be in uniform for Denver on Thursday against San Antonio.

The unofficial start of the trade season will kick off on Dec 15. It’s the first day many free agents who signed during the summer can be dealt. The deadline of the trade is on Feb 24.

When asked about the craziness that unfolded at the Pepsi Center after he scored 35 points in his team’s 111-94 win over Orlando, Anthony said,

“Everybody has their own opinion about the situation,” Anthony said. “I don’t know where that came from, though.”

Sources said that Anthony has not signed a three-year, $64.47 million extension and can become a free agent this summer.

Anthony content to keep his options open and focus on basketball, not his future

Anthony focusing on basketball, not futureDENVER — Carmelo Anthony said he loves being with the De...

AP Source: Deal sending Anthony to Nets is 'dead'DENVER — A four-way deal that would have sent Car...

Anthony shows up at Denver media day wearing Nuggets jersey, but how much longer is unclear

Bulls talking with C Noah on extensionDEERFIELD, Ill. — The Chicago Bulls are ready to get going t...

Chicago Bulls return to the court after offseason of changes, including one that didn't happen

Bulls return to court with new facesDEERFIELD, Ill. — A busy offseason is finally over the Chicago...
Copyright© 2010 The Gaea Times