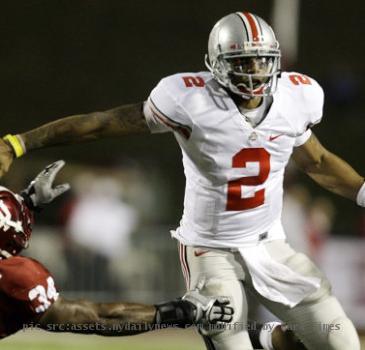 COLUMBUS (GaeaTimes.com)- The 2011 season is not going to kick off in a good note for Ohio State Buckeyes quarterback Terrelle Pryor. The player would not be able to participate in the first five games of the next season as he has been suspended by the NCAA over allegations that he is guilty of selling memorabilia as well as other awards and in turn receiving benefits. As per the rules and regulations followed by the NCAA, student-athletes are barred from getting any kind of benefits from their status which are not available to the general public.

Apart from Terrelle Pryor, four other players of the Ohio State Buckeyes are facing suspension from the NCAA which includes star wide receiver Devier Posey, left tackle Mike Adams, defensive lineman Solomon Thomas as well as Daniel Herron. Although the player would not be able to play in the first five games of the upcoming season, they would be available for the Sugar Bowl which slated to take place on January 4 in which the Ohio State Buckeyes would be facing off against the Arkansas Razorbacks. Meanwhile, it has been reported that the players who have been found guilty of taking the benefits are likely to repay the money as well as the gifts to the tune of $1,000 to $2,5000.

Sources say that Terrelle Pryor is the one who has been mostly affected as he might have to shell out $2,500 for being responsible for selling his 2008 Big Ten championship ring and a number of other gifts that was given to him by the university. Meanwhile, Ohio State University Athletic director Gene Smith has not been available for any comments.

With USC an underdog, no doubt the Trojans days of Pac-10 dominance are history

Underdog USC finds itself in unfamiliar roleIf there was still any doubt the days of Southern Califo...

Injured Terrell Pryor, defense lead No. 2 Ohio State out of danger, past Illinois 24-13

No 2 Ohio St expects Illini to stick with run, while QB Pryor could air it out for Buckeyes

He's not done yet: Forgotten Batch proves to NFL, Steelers his career is not over

Batch proves to NFL, Steelers he's not donePITTSBURGH — Charlie Batch was convinced he could still...

Sanzenbacher's 4 TD passes from Pryor spur No. 2 Ohio State to 73-20 win over EMU

Getting defensive: No. 19 Miami's defense is showing early season glimpses of greatness

'Canes defense riding high after strong startCORAL GABLES, Fla. — There was a play in Miami's one-...

Mallett, Threet and Robinson take different paths to success, but all run through Michigan

For 3 QBs, path to success ran through MichiganQuarterbacks, coaches and playbooks. No matter how go...

3 years after coming in as touted recruit, Ohio State's Mike Adams finally having an impact

It's taken time for Adams to earn jobCOLUMBUS, Ohio — Mike Adams came to Ohio State as one of the ...
Copyright© 2010 The Gaea Times