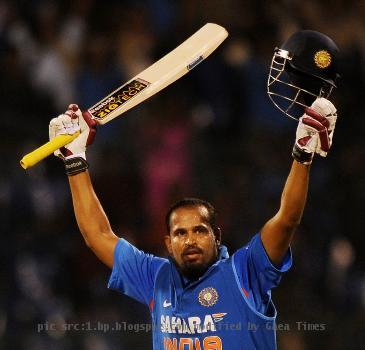 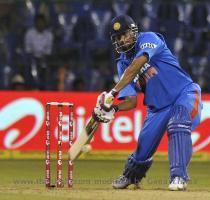 CENTURION, SOUTH AFRICA (GaeaTimes.com)- Yusuf Pathan’s blitzkrieg nearly did it for the Indians in the five-match-series finale against the South Africans. His electrifying 68-ball century was nearly putting the Indian cricket team in the history books, but sadly India’s batting order lapse again proved to be the decider as South Africa had the last laugh - winning the game and the series (3-2) by a margin of 34 runs.

Chasing 268 in 46 overs (D/L) the Indian batting order fell like a house of cards. India were panting at 68/5 when Yusuf Pathan took the crease. Soon he unleashed the fury, hitting mammoth sixes and getting the run rate ticking along. But at the opposite end, none of the Indian batsmen including captain M.S. Dhoni could give lay a foundation on the crease. But that didn’t refrain Yusuf Pathan from unleashing of what can be called a sheer carnage. With Zaheer Khan giving him a strong support, Yusuf Pathan literally massacred the South African bowling attack. He reached triple figures in 68 balls as India sensed victory for the first time in the match. But soon his dismissal put South Africa back in the game. Eventually India were bowled out for 234 in 40.2 overs as Yusuf Pathan’s century went down the drains.

Although India went on to lose the match, Yusuf Pathan’s heroics were hugely appreciated by the South African fans as well as the players. Yusuf Pathan’s merciless assault on the South African bowling attack at a time when India’s chance of winning the game became next to impossible did give a grim of hope, but none of the batsmen except Zaheer Khan were able to give a support. His swashbuckling century will still be remembered by many.

NEW DELHI - Ten top fashion designers and as many acclaimed artists of the country will merge art wi...

NEW DELHI - Rajasthan defeated Hyderabad by an innings and 256 runs on the third and penultimate day...
Copyright© 2011 The Gaea Times