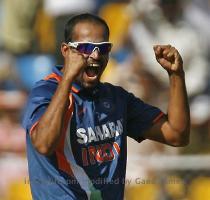 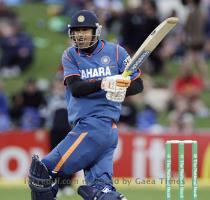 BANGALORE, INDIA (GaeaTimes.com)- India denied New Zealand their best chance of victory in the fourth ODI Bangalore thanks to a trailblazing century from Yusuf Pathan. The hard hitter scored 123* in just 96 balls and the knock included 7 fours and 7 sixes. Coming down to bat quite early on (20th over) Yusuf Pathan had the perfect opportunity to bat for a long time and he made full use of it by starting quietly and making use of the platform laid by the upper middle order and opening batsmen.

Soon after the dismissal of Rohit Sharma, Yusuf Pathan switched gears and unleashed a combination of shots that left the New Zealand bowling in tethers. Soon India looked en route to another easy win. Saurabh Tiwary played the perfect foil to Yusuf Pathan and scored 37* off 39 balls. The more impressive part of the match-winning partnership was that both Yusuf Pathan and Saurabh Tiwary continued to take the singles and twos and never let the asking rate look threatening.

With a ton that took the side to a comfortable victory, Yusuf Pathan might just have sealed his berth in the Indian side for the upcoming World Cup next year. Though the New Zealand bowling attack might not have been the most potent in World cricket today, but Yusuf Pathan’s knock proved that he can demolish a side if her gets into the groove early on in his innings. Considering that power-hitter and skipper MS Dhoni will also return to the side for the World Cup, the Indian lower middle order could turn out to be the most dangerous in the world.

NEW DELHI - Ten top fashion designers and as many acclaimed artists of the country will merge art wi...

NEW DELHI - Rajasthan defeated Hyderabad by an innings and 256 runs on the third and penultimate day...
Copyright© 2010 The Gaea Times