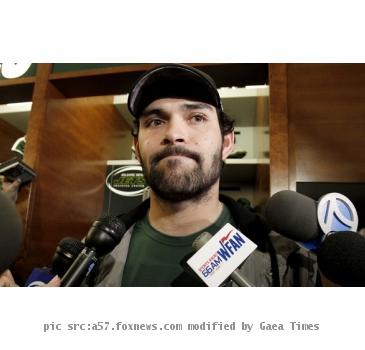 NEW YORK (GaeaTimes.com)- New York Jets star quarterback Mark Sanchez has provided the much-needed fodder to tabloid gossips after it was reported that the much-acclaimed player had a fling with a 17-year-old Connecticut based high school student. A news website broke the story earlier this week in which it claimed that the 24-year-old player has a one-night stand with Eliza Kruger, who is the daughter of wealthy hedge fund manager Konrad “Chip” Kruger. Since the juicy story of Mark Sanchez’s romance with the teenager has come to light, netizens have been scrambling the web to get updates about the spicy tale.

Getting the New York Jets star quarterback hooked is indeed quite a task and Eliza Kruger has taken the due credit through her recent post on the social-networking site where she brags about her sexual tryst with Mark Sanchez while also going to the extent of posting pictures of the messed up bed that holds testimony to their one-night stand! On Facebook, the 17-year-old says, “MARK FING SANCHEZ” who is supposedly met for the first time on New Year’s Eve at a nightclub in New York. According to reports, sparks had been flying between the two at their first chance meeting and soon the duo went to the New York Jets’ player’s house in New Jersey to spend more time.

Following the one-night stand, Eliza Kruger claims that the Jets player tried to get in touch with her on numerous occasions by texting her and expressing his desire to meet up again. However, the 17-year-old claims that she has not met the player since their first encounter.

World's oldest mother considering having another child at 72

LONDON - A Romanian woman, who became the world's oldest mother after giving birth to her daughter a...

LONDON - A woman in Britain has won the legal battle to bury her relative's body, which had been put...

LONDON - Britain will be at risk if its secrets are compromised, the chief of the country's Secret I...

Resources a click or call away for gay youth, loved ones and communities in light of suicides

WASHINGTON - A researcher has identified a new pathway used by the malaria parasite to infect human ...

MUMBAI - As many as 30 sportspersons Wednesday asked the youth of Maharashtra to maintain peace and ...

SYDNEY - A gene network behind the hardening of coronary arteries and heart disease has been identif...