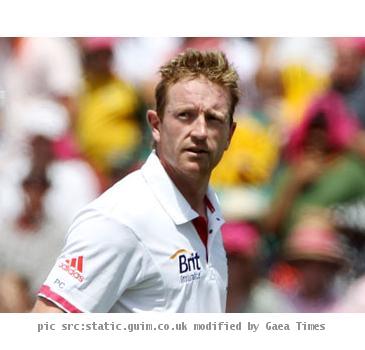 SYDNEY, AUSTRALIA (GaeaTimes.com)- After an illustrious cricketing career, English cricketer Paul Collingwood has announced that he would be retiring from Test cricket after the Ashes Test against Australia comes to an end. The 34-year-old ace batsman made the announcement on Thursday before the fourth day’s play in the Ashes ongoing series. Despite his retirement from the longer form of the game, Paul Collingwood would be remain an active player in the limited overs version of the game including his role as the captain of the Twenty20 team of his country.

In a statement that was issued by Paul Collingwood, the veteran cricketer said that it was just the right time for him to step down from the Test team to make sure that the young talents are given the opportunity to be part of the longer version of the game. The 34-year-old English batsman also went on to add that having achieved a special feat while playing for his home-land, it was time for him to bid adieu to Test cricket. In the statement, Paul Collingwood also expressed satisfaction that throughout his Test career, he has always given his best shot to ensure his team’s victory.

During his Test career, Paul Collingwood has managed to score 4,259 runs in 68 Tests with an average of 40.25. The Durham batsman also lead his team to victory at the World Twenty20 final against Australia in the month of March last year. However, the English cricketer has struggled with his performance in the ongoing Ashes series in which he has been able to attain only 83 runs at an average of 13.83.

US teacher accused of having sex with student, 16, freed on 20K dollar bond

NEW YORK - A teacher in Texas, who was charged with sexually assaulting a 16-year-old student and is...

Brangelina fork out $150k to promote adoption in U.S

WASHINGTON - Hollywood couple Angelina Jolie and Brad Pitt have given 150,000 dollars in recognition...

Soon, a pill to wipe out painful memories!

LONDON - Often there are moments that we wish to forget because they cause us so much pain like the ...

LONDON - A study of peak-time British programme has indicated that television dramas too often portr...
Copyright© 2011 The Gaea Times